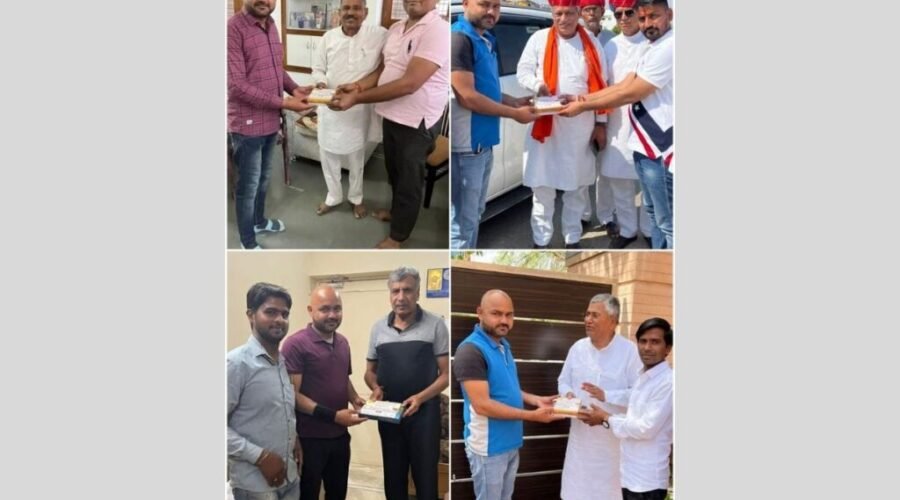 April 2: Members of the Marwar Yuva Sangharsh Committee have chosen to adopt Gandhigiri for the stoppage of long-distance trains at Pali’s Somesar Railway Station. The youth reached the public representatives with a smile on their faces and sweets in their hands to meet their demand for resolving an age-old issue.

People have been demanding for stoppage of long-distance trains at Pali’s Somesar Railway Station for a while now. But the railway administration has not been offering practical solutions rather shirking the residents away with false assurances. For this reason, the youth of the region decided to reach out to the public representatives with the Gandhigiri approach.

Rajpurohit shares, “Awareness Vans were taken in over 60 nearby villages in order to spread awareness about this problem and get postcards addressing the Railway Minister written. Representatives went from door-to-door to get the postcards written just for this purpose.”

Two long-distance trains that can be halted at the Somesar Railway Station are Bangalore Express and Haridwar Mail. Thus, this age-old problem can surely be resolved if the demand is met by the Railway Minister or concerning public representatives. Thousands of people would get relief if this problem is resolved.

“If the need arises, then I will not step back from heading to Delhi with the concerned villagers to meet the Railway Minister”, Septawas adds.

All villagers residing near the Somesar Railway Station have to catch a long-distance train from Marwar Junction or Falna Railway Station to go to Haridwar for bone immersion in case of death of a closed one. As the nearby areas or villages near Somesar are rural areas, enough means of transport to take them to Marwar or Falna Station are not available. Although many people from the nearby villages work in Bangalore and Mumbai, still this solution is not available. Thus, they have to spend a lot more money on traveling expenses than the living expenses they would require for their stay in the region.

Hukam Singh Rajpurohit, Septawas is a resident of the Somesar village, near Pali, and one of the main social workers and youth activists behind bringing this positive change for the village residents residing near the Somesar Railway Station.