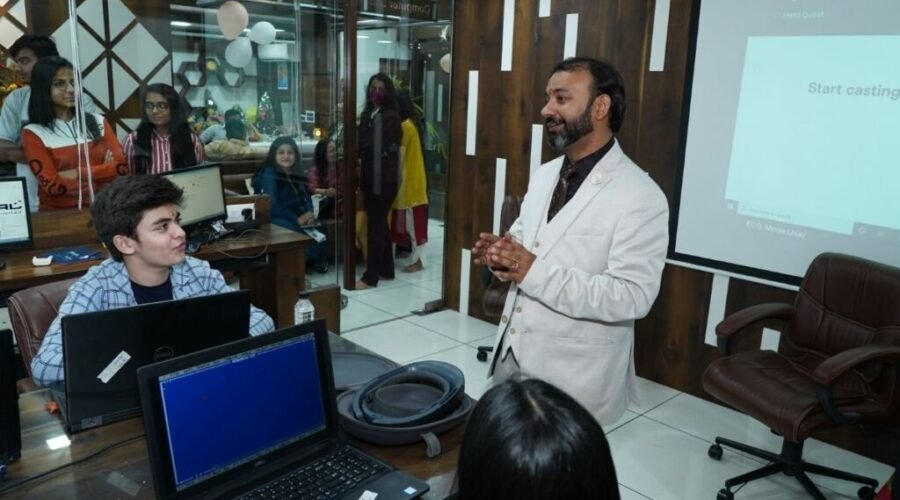 Gandhinagar (Gujarat) [India], March 9: Royal Technologies Pvt Ltd has been achieving back-to-back milestones under the able leadership of Mr. Dhiraj Poojara. With a view to advancing the career prospects of students, a much-awaited ‘Coding and Start-up Incubation Centre’ has been started in Gandhinagar. With this inauguration, students can now further their careers and make them brighter.

Dhiraj Poojara is an alumni of “Dhirubhai Ambani Institute” and a veteran IT consultant with over 17 years of experience. Needless to say, he is the trainer of the world’s youngest programmers at the “Coding and Startup Incubation Center”. Under his commendable guidance, many students are working at high-level posts in the country and abroad. And now this opportunity is waiting for you, too.

Among the dignitaries present during the inauguration ceremony include a chief guest, Shalini Duhan (IAS) Commissioner of Schools, Gandhinagar and Dr. K.S. Dasgupta Ph.D., IIT Bombay, as well as DA-IICTE Space Scientist. They have also provided the necessary guidance to the students and explained the importance of this centre.

One of the most baffling questions in a career is, “What to do after 10 and 12?’. This question has always kept both students and parents in a dilemma. Thanks to this centre as it will emerge as an effective platform with plentiful opportunities for the students. On this occasion, Dhiraj Poojara announced that he would provide free programming courses along with various skills and personality development training to any students who have lost the shelter of their parents and also for those who are financially backward.

Speaking on this inauguration occasion, Dhiraj Poojara said, “In today’s age, those who are not updated and don’t know coding will not be able to survive, just as the dinosaurs who couldn’t survive on this earth. One needs to know the technology deeply. These days many sites and data are usually being hacked. If we do not have a security coder in each of our families, we can use the system, but we can never protect it. Not just a doctor, a coder too, must be in every family. Such should be a future vision. Otherwise, even a country like China could rule us.”