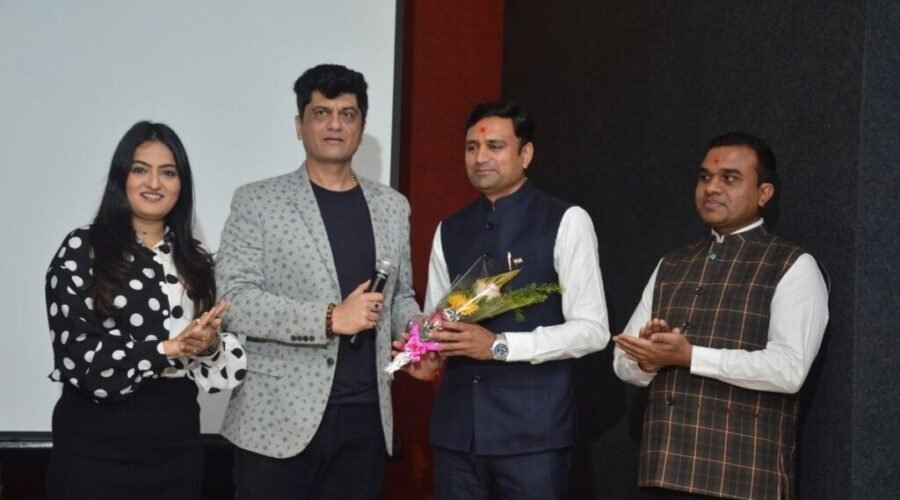 April 4: In the Honour of Amrut Mahotsav of Independence under the leadership of Honorable Prime Minister Shri Narendra Modi , Sampurrna Vikas Trust  has taken the initiative to make Guinness World Record under the Title “Most People in Speech Relay”, in which 250 speakers from India will Speak on 250 Topics on the Growth of India.

Surat the city of diamonds will make history in Most People in Speech Relay on the topics of ‘Vikas sheel Bharat’ (Developing India). Industrialists, entrepreneurs, women entrepreneurs, students, scholars, etc., will be delivering over 250 non-stop speeches continuously for 24 hours at a single location to claim a name in the Guinness World Records.

With the support of Gujarat Chief Minister, Bhupendra Patel and Gujarat BJP Chief, CR Paatil. Speakers in Most People in Speech Relay will be delivering their speeches on various Topics at the Performing Arts Centre in Adajan on 9 th April 2022. Piyush Vyas, vice-president of Sampurrna Vikas Trust is an entrepreneur, international qualified motivator, and business coach, who recently claimed his name in the Guinness Book of World Record certificate for delivering most speeches in 24 hours.

Pooja Vyaas is the president in Sampurrna Vikas Trust, her role is to mentor these Participants and help them to achieve this World Record.

“Most People in Speech Relay will be attempted by more than 250 Speakers and will be dedicated to Prime Minister Narendra Modi and his Developing India mission in the country for the last eight years. The Speakers will deliver speeches for 4-5 minutes to officially attempt the non-stop relay speeches for 24 hours at a single venue” said Piyush & Pooja.

Most People in Speech Relay has been supported by Shree Hari Group and its owner Rakesh Dudhat, Aarya Club, Ajmera Fashion, and Sakhiya Skin Clinic.

Pooja Vyaas, president of Sampurrna Vikas Trust, who is a corporate trainer and lifestyle coach, said, “IT is a once-in-a-lifetime opportunity for the speakers to gain worldwide recognition by attempting Guinness World Record. This will increase their goodwill and authenticity and upgrade their professional value. The longest speech relay is based on ‘Bolega India toh Jeetega India” tagline.

According to the organisers, the participants at the longest speech relay will be given free public speaking training, offline training, demonstration of speeches, and certificate of training from Star Personality Development, outputs of the topics, social media post support, etc. Doctors, lawyers, employees, industrialists, educationalists, diamond merchants, association presidents, startups, young achievers, sports personalities, school and college students, and working women will be participating in the longest speech relay.