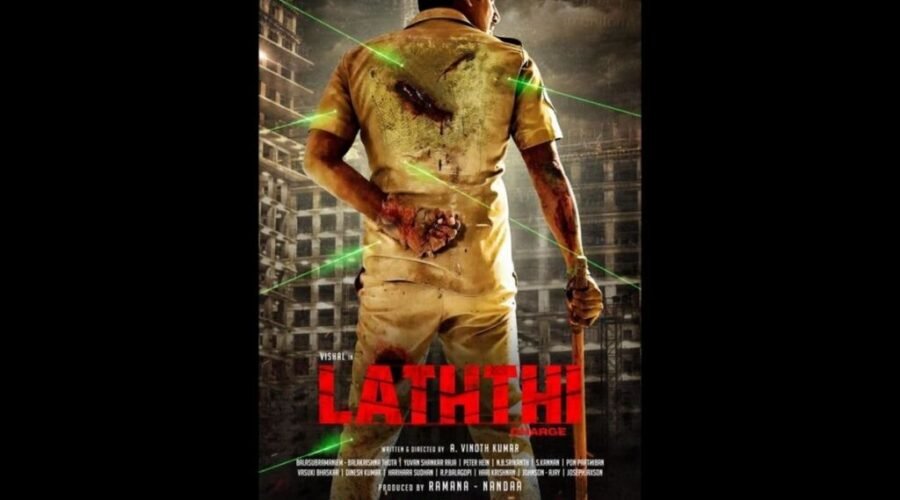 April 7: Indian actor Vishal Krishna released the first look of his upcoming movie Laththi and is delighted with the response he has received in all languages. This big budget film is Vishal’s 32nd film which is made for the audience in India and worldwide.

His best friends Nandaa Dorairaj & Ramanna have become first time producers for this movie. The movie is directed by debut director Vinodh. South actress Sunaina plays the female lead opposite Vishal. The movie will be released in five languages – Telugu, Tamil, Hindi, Malayalam and Kannada.

Vishal says “In this cop action entertainer, I am very excited to show and see myself in a completely different character. The audience always wish to see us actors in versatile genres and I believe that it is important to do something different in order to seek their attention. I play the role of a police constable in the movie which I have never portrayed before apart from playing a father to a six-year-old. The action sequences are an integral part of the movie and it has been a fabulous experience inspite of doing many action films. it is childlike excitement for me. The stunts in this movie, the multiple bruises and the injuries on my body will reveal the intensity of the sequences and the effort that all of us have put in which will be a visual treat for all action lovers worldwide.”

He adds “The action sequences are choreographed by none other than India’s best action choreographer Peter Hein and I am teaming up with him for the first time in my career. It is going to be fire crackers all the way since I have never shot an action sequence for so many days at a stretch. It has taken more than 60 days to shoot the last 45 minutes of the high octane climax action sequence.”

The post Most awaited first look of the film Laththi appeared first on Republic News Today.