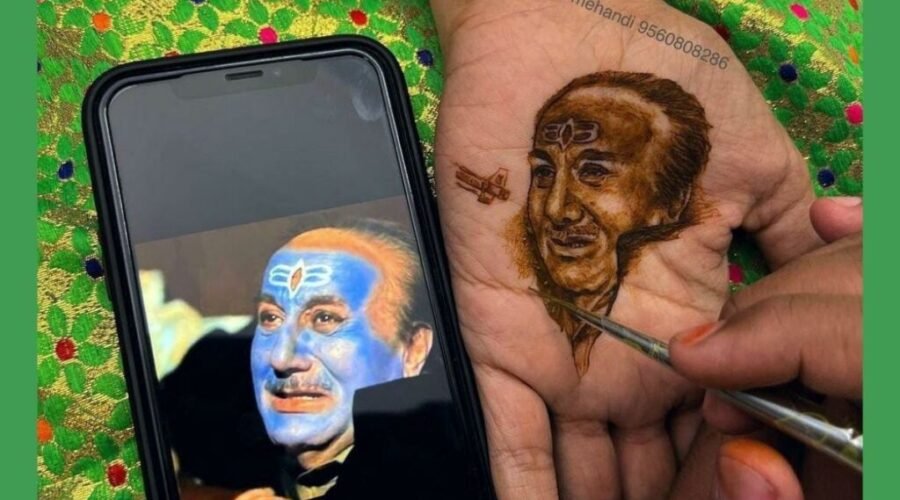 New Delhi (India), April 9: In a unique tribute to The Kashmir Files, the Bollywood movie that has become a super hit, Delhi-based Kanha Mehandi Art and Kriti Verma Art have come together to etch the face of actor Anupam Kher, who plays the role of Pushkar Nath in the movie, using henna art.

“The idea was to use our speciality to present a glimpse of The Kashmir Files and pay a special tribute to the film’s actors, makers, and thousands of Kashmiri Pandits whose life has been captured in the movie. This gesture was a tribute from one art form to another,” said Kriti Verma, Founder of Kriti Verma Art.

Besides having been a participant in Bigg Boss season 12, Kriti, a former GST inspector by profession and a trained dancer, was also seen in Roadies Xtreme in 2018.

Asked about the reason for the tribute, Kanhaiya kushwaha of Kanha Mehandi Art said they were inspired by people finding their special ways to pay tribute to the filmmakers and actors who showed immense courage in presenting this bold film to the whole world.

“We have seen Salman Khan personally calling up Anupam Kher to congratulate him on his role in the film. Gujarati film ‘Prem Prakaran’ withdrew from theatres so that more shows could be allotted to The Kashmir Files. We also read about a Surat-based textile merchant creating a special saree in honour of the film. All this is justified for the heart-breaking narrative that has taken the whole nation by storm, and we felt we must also pay a tribute in our very own special way,” he said.

The Kashmir Files presents a fictional storyline depicting the exodus of Kashmiri Pandits during the insurgency in Jammu & Kashmir as genocide. Released on 11 March 2022, the film has been granted tax-free status in multiple states. The movie is inching towards the Rs 250 crore Box Office collection mark and is set to be released in Singapore and the UAE. Anupam Kher’s brilliant performance as Pushkar Nath has embedded his place in many hearts.

The video of the art created by Kanha Mehandi can be found on its Instagram page (https://www.instagram.com/kanha_mehandi_art).