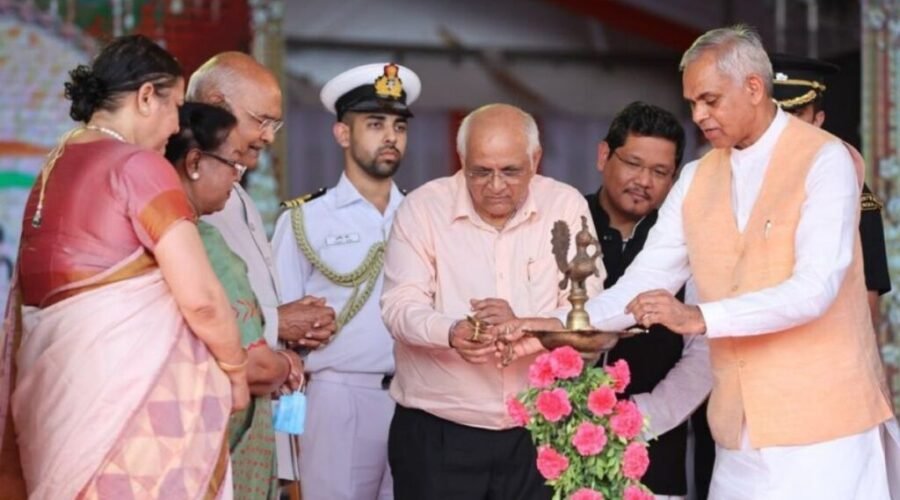 The fair is organised every year in Madhavpur Ghed in Porbandar, Gujarat, to celebrate the sacred union of Lord Krishna and Rukmini.

President Ram Nath Kovind had inaugurated the Fair on April 10 and it culminated in the presence of chief ministers and union ministers on April 13.

Porbandar (Gujarat) [India], April 16: The four-day Madhavpur Ghed Fair at Madhavpur Ghed in Porbandar, Gujarat, which is organised every year to celebrate the sacred union of Lord Krishna and Rukmini, culminated on Wednesday.

The Fair, organised by the *Gujarat Tourism, Youth and culture Departmemt,* government of Gujarat in association with the Ministry of Culture since 2018, was inaugurated by President of India, Ram Nath Kovind on April 10. He had said on the occasion that it was his privilege to inaugurate the Fair organised in the village associated with the life of Lord Krishna and near Porbandar, the birthplace of Mahatma Gandhi. He had also said that the Madhavpur Ghed Fair is a celebration of India’s cultural, spiritual and social unity.

The Fair highlights Gujarat’s links to Northeast India and Prime Minister Narendra Modi recently described it as a “deep bond between India’s east and west”. The Fair culminated on April 13 and was attended by chief ministers, union ministers, and other top political leaders.

Participating in the religious festivities on the final day of the Fair Gujarat Chief Minister Bhupendra Patel said the Fair brings together the far east of the country and the west.

“Under the leadership of Prime Minister Narendra Modi, the new generation is getting to learn about the rich heritage and culture of the country. The Fair is organised to celebrate the marriage of Lord Krishna with Rani Rukmini, who was from the Northeast, and has become a symbol of the strong cultural connection between Gujarat and the Northeast,” Patel said.

Patel added that the festivals associated with Madhavpur Ghed Fair underline the unity and diversity of India and exhorted the new generation to connect with its cultural roots.

In his address, Assam’s Chief Minister Himanta Biswa Sarma said he was fortunate to have received the opportunity to attend the Madhavpur Ghed Fair.

“Assam and Gujarat may be geographically separated by 3,000 km, but both states share a very close and strong bond in culture, history, and ancient literature. The Madhavpur Ghed Fair is the highest symbol of connecting people of the two states,” he said, inviting people of Gujarat to visit Assam and experience the development that is taking place in the state and other parts of the Northeast region.

Union Minister of State for Education and External Affairs Rajkumar Zanjan said events like the Madhavpur Ghed Fair, which celebrate culture and religion, are an ideal medium for advancing and realising the vision of “Ek Bharat, Shreshth Bharat.”

Union Minister of State for Petroleum and Natural Gas Rameshwar Teli lauded the Gujarat government for organising the Madhavpur Ghed Fair saying such events are a must to keep alive the country’s culture and traditions.