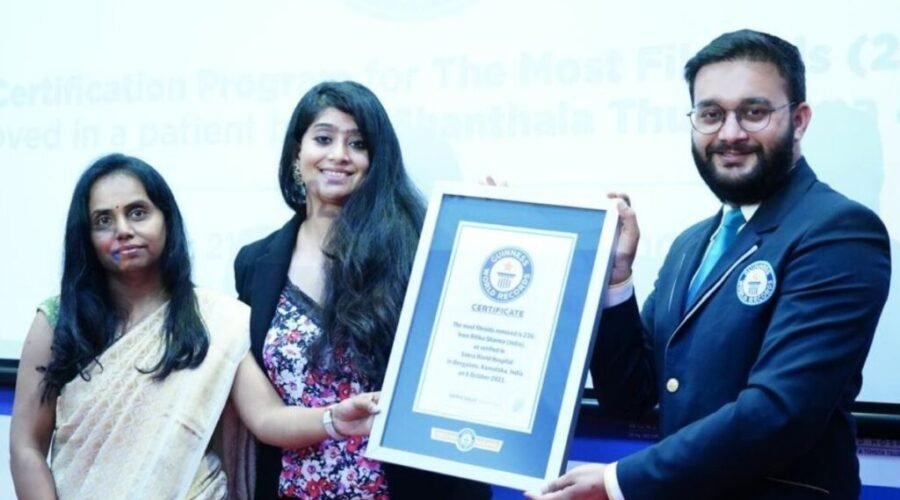 Ritika, at the time of her diagnosis at Sakra World Hospital, suffered from abnormal menstrual bleeding and had an enlarged abdomenresembling 8-month pregnancy due to the different sizes of the fibroids.In a four-and-a-half-hour surgical procedure, Dr. Shanthala Thuppanna and her highly experienced team of gynecologists performed a myomectomy and thoroughly removed all of the fibroids of her uterus.

Commenting on the record, Dr Shantala Thuppanna said, “It seems incredible being part of this surgery which has created a new Guinness World Records title. I am glad that we successfully managed to remove all the 236 fibroids during this complicated surgery since fibroids were located below the urinary bladder and ureter and were spread throughout the left side of her uterus and very near to important structures in the abdomen. I hope that this moment of celebration today will also serve as a cautionary tale to all women to stay aware of such underestimated comorbidities and consult experts at the earliest to safeguard themselves from unwarranted complications.”

Alluding to this unique achievement, Ritika commented, “This is an unexpectable event and this recognition will be an unforgettable one as it constantly reminds me to how, along with the team at Sakra World Hospital, we overcame the situation victoriously. I would like to extend my heartfelt gratitude to Dr Shanthala and the entire clinical and nursing staff for explaining every bit of the procedure and giving me the best clinical advice while undergoing the surgery.”

Uterine Fibroids have become increasingly widespread in recent years, with estimates ranging from 40 to 50 percent of women suffering from them. Only a few of them suffer the symptoms, and the majority of them go unrecognized. It is important to seek the advice of doctors and professionals in order to receive the right diagnosis and treatment.

Located at Outer Ring Road, Marathahalli, Bengaluru, Karnataka, Sakra World Hospital, a Japanese brand under the leadership of Toyota Tsusho and SECOM is India’s first MNC hospital. It is a 350-bed hospital, providing healthcare across all specialties such as Neuro Sciences, Cardiac Sciences, Orthopaedics, Women and Child Health, Digestive and Hepatobiliary Sciences, Renal Sciences, Emergency and Trauma Care. There are 12 integrated modular operation theatres (OTs) with cutting-edge, state-of-the-art technologies like OR integration solution that features video input recording, saving and displaying from a range of sources like surgical camera, peripheral camera and MIS camera.