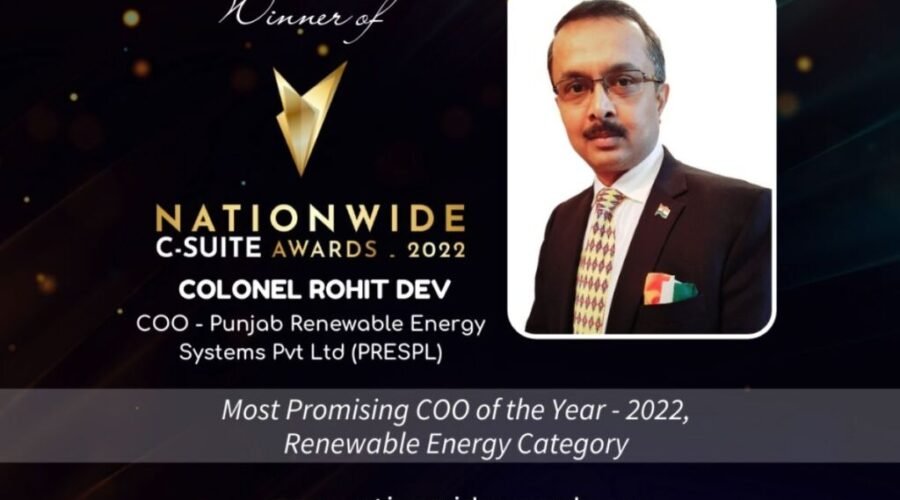 New Delhi (India), May 5: Renewable Energy Sector is an enabler towards India’s NetZero2070 Dream and Biomass-based Bio-Energy Industry is a niche domain which will contribute towards Biofuels like 2G Ethanol, CBG, SAF, Green Hydrogen and much more, while today the industrial applications are immense with huge prospects for entrepreneurship, growth, and refinement.

A COO has to be dynamic, innovative & possess foresight and strategic attributes to lead in this Industry. One such personality is Colonel Rohit Dev; COO of the Punjab Renewable Energy Systems Private Limited; a 1st-time Entrepreneurial Endeavour of Lieutenant Colonel Monish Ahuja and today infused with Strategic Investor Partners like Shell & Mitsui and Investors in responsibility & Neev Fund.

He is a person with a distinguished military career which spans nearly 24 years & vast experience and knowledge garnered during his military tenure has helped him lead in the ‘Corporate Avataar’ since 2018.

Throughout his career in the military, he has distinguished himself professionally. He was a graduate of the National Defence Academy and has done several certification courses from prestigious institutes such as IIM, NIFM, and IIMC etc. He has been part of operational & logistic missions as part of the United Nations in Africa and held the most prestigious operational and logistics appointments while in the Army. He is widely regarded as a person who has had a penchant for thinking out-of-the-box, since his early days in the Armed Forces. These qualities of thinking quickly on his feet and devising innovative solutions to complex problems are what make him an ideal COO in the fast-changing corporate scenarios and to retain the competitive edge of his Company,  PRESPL, in the Industry. His military experience also incorporates discipline in his life; which in turn is integrated into process refinement in the organizations he works for today. He has vast experience in leadership roles, coupled with military-enabled HR skills, being a Distinction in M.Sc. in Operational Art & Strategic Thinking, augment his ever-evolving and impressive corporate portfolio.

He has effectively contributed to the recognition and growth of the Biomass-based Bio-Energy Sector and his contributions in the Renewable Energy Space are well-acknowledged and his Policy Advocacy for the Industry is well accepted by Government, Industry bodies, and Agencies, in India and abroad. He has authored papers for various International journals & publications and has been a vocal proponent of Renewable Energy on many domestic & international platforms. He has been able to shape thoughts of Industry to commit to Bio-Energy solutions and reduce expenditure on import of fossil fuels, bring greater quality of life to the rural sector, introduce initiatives towards better climate and health; with a focus on Sustainable Development Goals and ‘Aatmanirbhar Bharat’.

He has also made a significant number of appearances on televised debates and talk shows in Indian and foreign media and social media, as a renewable energy voice, a geopolitical analyst and a defence expert; which is a testament to his strategic acumen, oratory skills and thought-provoking ideas. He is also a lead Adjunct Professor with the Rashtriya Raksha University; besides being on various Government Committees & Boards.

With his influencing potential on social media, calm presence in Industry, equally enigmatic quality of getting things done and committed Nationalistic Approach as well, Colonel Rohit Dev has managed to surpass all the obstacles in the path to promote the Bio-Energy Sector and in recognition of his selfless Toil, has been bestowed with the C-SUITE AWARD as the “Most Promising COO of the Year, Renewable Energy 2022”.

As the moniker of the Award states that it’s given to someone who is known to have great potential to be one of the most prominent players in the corporate industry space and we wish Colonel Rohit Dev good luck and wishes in his continuing endeavors to shape the Energy Transition through Green Energy Revolution in India.