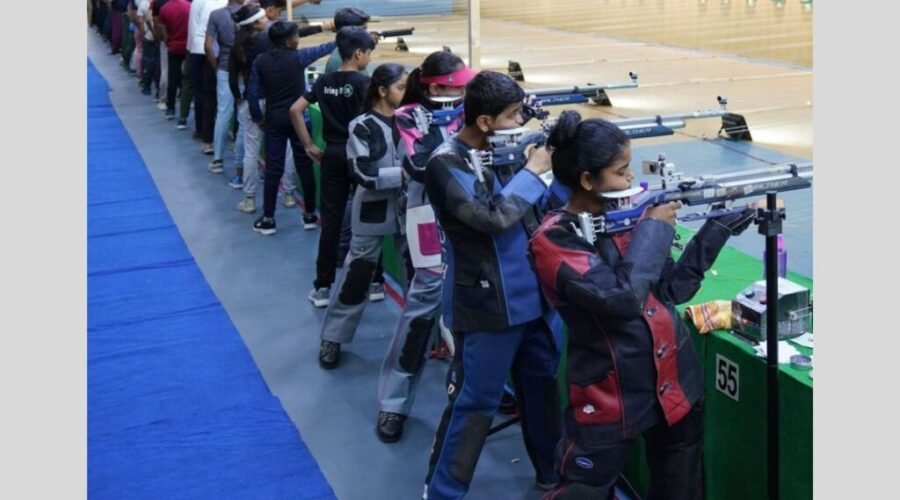 May 5: Today sport emerges as an important component of socio-economic development of our country. Thus, it becomes vital for schools to offer good opportunities to students to engage and compete in sports. As one of the top schools in India, Ramagya School strives to help-develop this growing sports culture among the people of the nation. For Ramagya, holistic health for all is equally essential as healthy citizens contribute not only in the development of GDP but also strive to bring name, laurels and glory for the nation. Keeping up with the trend, Ramagya School recently hosted the “14th Pre-U.P. State Air Weapon Shooting Competition” by U.P. State Rifle Association (UPSRA) in collaboration with Shoot X academy. Participation was open to competitors belonging to Uttar Pradesh only.

The ‘14th Pre-U.P. State Shooting Competition’ witnessed a phenomenal success with record-breaking 1800 participants from 48 districts and 35 shooting clubs of Uttar Pradesh participating in the competition. Moreover, the competition was one of India’s biggest shooting events in recent times with 80 shooting lines used during the competition. The event was blessed with the presences of some of India’s biggest names in shooting as chief guests. The competition was organized in various categories such as Air rifle Championship Men Individual and Team, Women Individual and Team, Junior Men, Women, Veteran Individual, Handicapped Men and Women. The Jury of the competition consisted of following Members: – 1. Shri Jagdeep Madhok, Senior Vice President, UPSRA. 2. Shri G.S. Singh, Honorary Secretary General, UPSRA. 3. Shri Rohit Jain, Joint Secretary, UPSRA. The event was declared open on 23rd April, with an opening ceremony. The ceremony boasted of the shining stars of Shooting Arena as guests, such as Mr. G.S. Singh (Gen. Sec, U.P. State Rifle Association); Mr. Arun Singh (Joint Secretary, U.P. State Rifle Association) and Mr. NitinChaudhary (Founder& Coach, ShootX Academy). The event was also graced by the presence of Dr. Sanjay Gupta (Chairman, Ramagya Group), Mr. Utkarsh Gupta (MD, Ramagya Group) and Ms.Aparna Magee (Principal, Ramagya School, Noida).The event commenced with the lightning of the lamp. The esteemed guests of honor spoke to the gathering about the need of recognizing sports as an asset and striving for the betterment of scope in Olympics. They also spoke about the famous shooters of India-their lives and their struggle.

In an interview, Mr. G.S. Singh said, “The Ramagya School and ShootX Academy have done an exceptional work in organizing this prestigious shooting competition by U.P. State Rifle Association – one of the oldest State Rifle Association in India. Such events greatly boost the morale of young and aspiring shooters in bringing laurels for the nation.”

The final rounds of the completion were held on 26 April, 2020 and the awards were presented by legendary shooter and the president of the U.P. State Rifle Association – Mr. Shyam Singh Yadav. At the end of the closing ceremony, Mr. Utkarsh Gupta (MD, Ramagya Group) and Ms. Aparna Magee (Principal, Ramagya School) congratulated the participants of the competition and extended their best wishes for the upcoming National Championship.