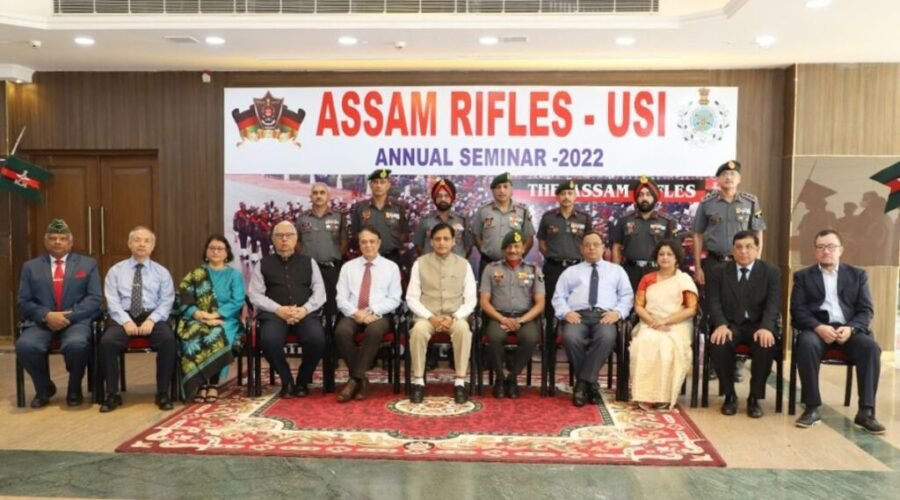 New Delhi (India), May 7: Raised on 24 March 1835, Assam Rifles is the oldest Paramilitary Force in the country. Assam Rifles Raising Day is observed every year on 24 March and to commemorate the same, the Director Generals Conclave is held in New Delhi prior to the Raising Day. This year in view of the Covid-19 Pandemic, the DGs Conclave and Assam Rifles Annual Seminar with USI of India was held on 06 May 2022 at Shaurya CRPF Training Institute, New Delhi.

The proceedings of the day began with the Annual Seminar with USI which was graced by the Honourable Union Minister of State for Home, Shri Nityanand Rai who addressed the seminar. The seminar was based on the theme “Economic Growth is Prerequisite to Address Deeply Rooted Insurgencies in the North East”. The curtain raiser for the event began with address by Maj Gen BK Sharma, AVSM, SM (Retd) Director USI and a Special address was by Lt Gen PC Nair, AVSM, YSM, DG Assam Rifles. The Seminar was attended by a large no of civilian dignitaries, serving and retired Officers of the Assam Rifles, CRPF, Indian Armed Forces and members of Media. The aspects brought about by the speakers of the Seminar gave valuable inputs on the dynamics of the North East and the role economic development can play towards its growth, peace and prosperity. The invaluable suggestions from the speakers and audience of various fields generated valuable thoughts to ponder over for all decision makers thereby making this event a grand success.

The evening proceedings included the DGs Conclave which was chaired by Lt Gen PC Nair, AVSM, SM**, DGAR, and attended by the Ex-DGs & other officers of Assam Rifles. During the Conclave, discussions on various issues on the general functioning of the Force, the current security situation in the Northeast and future action plans were held.