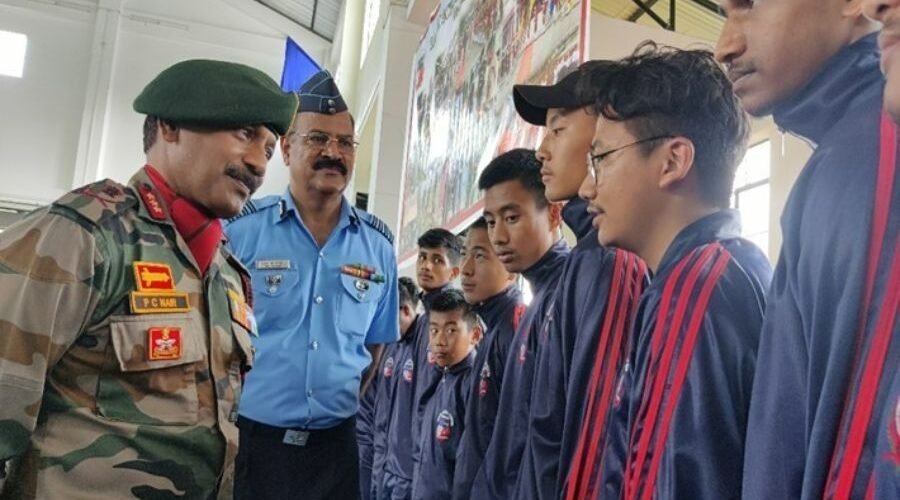 The closing ceremony of the championship was conducted on 18 June 22 and was graced by Lt Gen P C Nair, AVSM, YSM, Director General Assam Rifles, as the Chief Guest. The DG, himself an alumnus of Sainik School, Satara, interacted with the Cadets and staff of the participating schools before the event. The event was attended by several dignitaries, including serving defence Officers, Deputy Commissioner Peren, LBA members, Members of Parents Association, and members of the Old Boys Association of Sainik Schools Nagaland. Principal SSPN delivered the opening address. The event was colourful with a cultural program including mimes, group dance, group songs, solo songs and a painting exhibition as part of the event. During his special address, DG Assam Rifles apprised the audience about the initiative taken by Assam Rifles for admission of local students, including spreading awareness for registration of candidates to Sainik Schools in the North East. He encouraged students to take up sports as it instils teamwork, camaraderie, leadership, patience and discipline, which prove helpful in all walks of life. He complimented the Principal of SSPN and staff for the event’s successful conduct, which would instil sportsmanship and esprit-de-corps amongst the cadets. The DG further exhorted all cadets to join the Armed Forces.

Over the last two years, Assam Rifles has been using education to facilitate the youth of the North East to get better educational and employment opportunities. Assam Rifles in Nagaland, in the last year, had trained 294 students for Sainik Schools, out of which 40 students have already been selected for Sainik Schools across the Country. Assam Rifles further has also signed a Tripartite MoU with corporate partner Axis Bank and training partner National Integrity and Educational Development Organisation (NIEDO) to establish ‘Late Capt N Kenguruse, MVC Centre of Excellence and Wellness’ for a residential coaching and mentoring facility for students from economically weaker and underprivileged sections of Nagaland to prepare them for competitive examinations. Assam Rifles continues its commitment as the Sentinels of the North-East.