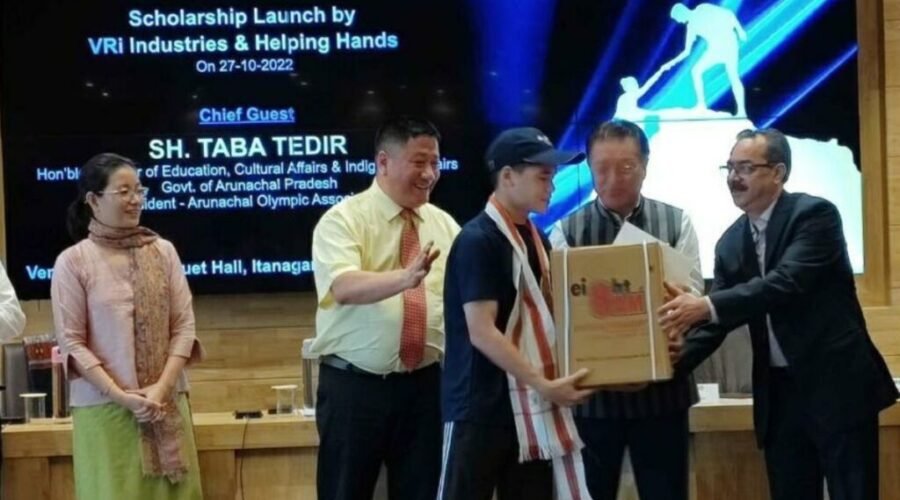 “Sports Diet” as a Scholarship has been offered for the first time to budding champs from North East states thus marking a new era for Sports in the country.

New Delhi (India), November 16: In an event hosted at the State Banquet Hall in Itanagar, the much awaited first of its kind “8AM Sports Diet Scholarship” was recently launched and awarded to selected budding sporting champs from North East. The “8AM Sports Diet Scholarship” comprises a nutritious breakfast diet from this Olympics to the next Olympics and a one-time monetary Scholarship of Rs 10,001/. The Chief Guest of the event was Taba Tedir, Education Minister and Arunachal Olympic Association President.

In all, a total of 50 budding sports champs had been chosen to be awarded the “8AM Sports Diet Scholarship”. The 50 chosen sports champs are pursuing sports as their career, and happen to be National/State level medal winners below 20 years of age from different sports category recognized by the Indian Olympic Association. They are the bonafide residents of North Eastern states.

Buoyed by the glory that Indian athletes brought to the nation in the recently concluded Tokyo Olympics, the idea of a “Sports Diet Scholarship” was conceived by Major Vishal Bakshi (VSM), M.D V.R Industries.

The project took wings when Major Bakshi got in touch with First IPS from Arunachal Pradesh Robin Hibu (President Helping Hands NGO) who extended him all possible support in giving shape to this ambitious plan.

Lauding the efforts of Helping Hands and the sponsors, Minister Tedir said, “The state of Arunachal Pradesh has humongous sports potential. The small 17 member state team created a record of sorts in the recently concluded 36th National Games in Ahmedabad, Gujarat when the contingent won seven medals. The need for nutritious food stuffs for players to play well would be solved by this much needed scholarship. Initiatives such as “Sports Diet Scholarship” would play a vital role in transforming Arunachal into a Sports House of India. Our aim should be to make Arunachal Pradesh the National Sports Hub of the country.”

It was quite an uphill task for Helping Hands NGO as they had to first meticulously choose the most promising sports champions from the different North East states and this they did, by working in sync with Indian Olympic Association. The second big challenge before the Helping Hands Team was to ensure the various logistics in ensuring a hassle free delivery of Sports Diet Scholarship to champions from seven sister states of North East as well as the mountain state of Sikkim.

V.R Industries that has been serving the Armed Forces for more than two decades by offering its wide range of breakfast cereals has launched a unique “8AM Sports Diet Scholarship” in sync with Helping Hands NGO for promoting budding sports champions from the eight North Eastern states of the country.

Says Major Vishal Bakshi (VSM), “Launch of “Sports Diet Scholarship” marks a new era for sports in India. The breakfast diet includes Corn Flakes, Muesli, Instant Porridge, Oats, and Trail Mix. There is no dearth of sporting talent in the country, but ironically, the reason why we still trail in mega sporting carnivals like Olympics is because we do not promote healthy balanced diet to match up to the standards of the international athletes. While talent can be God gifted, the same cannot be said for fitness as one needs to toil hard for maintaining a fit n’ fine body. Besides following specific fitness regimes in the daily lifestyle, it is imperative to augment it with a healthy and balanced diet for ensuring a fit and healthy body. Let us remember one thing clearly, “Jo fit hai wo Hit hai” meaning that one who is holistically fit stands more prospects of scaling new peaks. Health being an important aspect of life, both the government and the key stakeholders need to give it top most priority. There can’t be any ambiguity about the fact that a healthy lifestyle can only be maintained by inculcating healthy eating habits.”